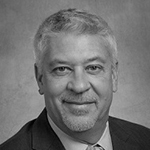 
Dr. Michael Salter is Chief of Research at The Hospital for Sick Children (SickKids), a Senior Scientist in the Program in Neurosciences & Mental Health, and a Professor of Physiology at the University of Toronto.

Salter received an MD degree from the University of Western Ontario in 1982 and went on to obtain a PhD in Physiology from McGill in 1987. After post-doctoral training at Toronto Western and at Mt. Sinai hospitals, he joined the Research Institute of SickKids in 1990. From 1999 to 2009 Salter was the founding Director of the University of Toronto Centre for the Study of Pain.

Salter’s main research focus is on synaptic physiology, in particular in relation to pain, and he has done ground breaking work that has led to new paradigms about neuroplasticity and about how synaptic transmission in the central nervous system is regulated by biochemical processes within neurons and by glial-neuronal interactions. His discoveries have broad implications for the control of cell-cell communication throughout the nervous system and his work has regularly appeared in elite journals including Nature, Science, Cell, Nature Medicine and Neuron.  Salter has a broad interest in neuroscience and his work relevant to learning and memory, stroke-induced neuron death, epilepsy and schizophrenia. As a distinct line of research, he and his collaborators reported in Cell in 2006 their discovery of a previously unsuspected role for sensory neurons in the pathogenesis of diabetes and in the control of glucose homeostasis.

To facilitate the translation of his fundamental studies to the development of new therapies for humans, Salter is a founding scientist and actively involved in a start-up biotech company – NoNO Inc. Salter currently holds the Northbridge Chair in Paediatric Research.  He has received numerous awards including the E.B. Eastburn Award, the John Charles Polyani Prize in Physiology or Medicine, the Early Career Investigator Award of the Canadian Pain Society, the Distinguished Career Investigator Award of the Canadian Pain Society, and was an International Research Scholar of the Howard Hughes Medical Institute.  He is a Fellow of the Royal Society of Canada.